These are my older plans mostly pre 1993 when the plans were hand drawn on paper then traced on or either tracing paper or film. These  were both sold my myself or in some cases published in magazines. These plans are PDF scans of the original A1 and A0 format plans.  In many instances they have not been available since 1996.

There are some later drawings post 1993 that were computer drawn and also produced in A1 and A0 format. These in most cases have been reformatted into smaller A4 and A3 sizes for home printing.

There is a third group of plans that will follow later which are designs for production boats that never published and that have been reproduced in 3D CAD. Some other designs were one off designs for customers and designs that were never built. 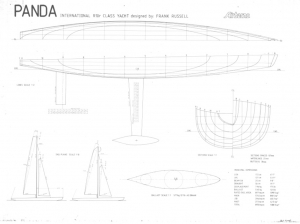 This design was my first very successful 10r design. Originally only two Pandas were built by myself and mike Newman. Both male molded S glass and vinylester resin hulls with wood foils and wood framed heat shrink decks. The Mk2 was the same boat with a slightly longer stern female molded by myself  mostly in glass, some with gelcoat, some in Kevlar. Although the design never won an Australian Championships it did win numerous Australian State Titles and was the boat to beat for the next five years in Australia. A Mk3 version with carbon hull and elliptical foils won the Australian titles in 1988 sailed by Mike Newman.  LOA: 1720mm LWL 1320mm Beam 250mm DISP 8.0kg.

Plan is PDF scan of original A0 sized tracing and Airborne Magazine article. $15 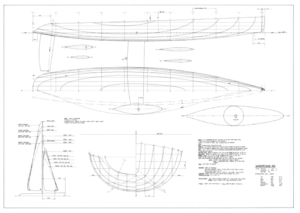 This design was molded by Frank Russell very successful within Australia. The prototype was balsa planked in 1985 and won the ACT M Championship in 1987. Later molded boats won many Championships Including:  1989, 1990 and 91 ACT and NSW Champion, 3rd 1990 National Titles.  Beam 260mm DISP 5.2 kg.

Plan is PDF scan of original A1 sized tracing. $15 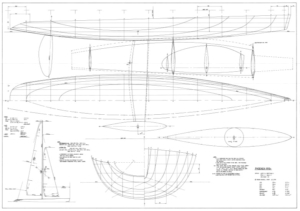 This design was molded by myself and is the 10r version of the woodpecker Marblehead. This was a very successful design and was a departure from the long narrow heavy boats previously racing. LOA 1550mm LWL 1350mm BOA 290mm BWL 230mm Disp 6.6kg Ballast 4.6kg.

Plan is PDF scan of original A1 sized tracing. $15

Alien was designed at the request of a US sailor to suit light air US conditions. I don’t know if it was built or raced in that country, but several were built in Australia slightly heavier displacement by planking in 6mm balsa without reducing the planking thickness with good success in lighter conditions. The hollow stern profile is now illegal but it can be easily filled in during construction.

Plan is PDF scan of original A1 sized tracing plus 4 A3 sheets. $15 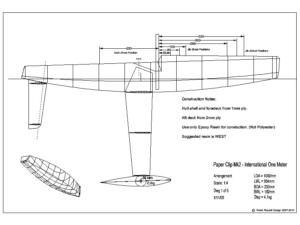 Plan is 6 sheets A3 PDF redrawn from the original A0 size plan. Includes a seperate full size PDF hull panel file that can be used to laser cut the panels.  $15